Last week was the WebSphere User Group UK event held at Bedfont, UK.  I helped to organise this with a group of other people on the WUG board.  I'm pleased to say it was a great success and the sessions went down very well indeed among the 200-250 attendees

If you'd like to see some of the foils, they will be uploaded here shortly.

This year marked the 10th year of the UK WUG since Alan Chambers created the group back in 2001. We celebrated with an amazing cake, made for us by Cath at www.wishcakes.com.  I know she did amazing cakes as she made our wedding cake! 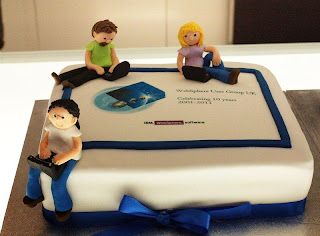 I'm pleased to say that there were a good number of developers from Hursley attending, which allowed us to set up a helpdesk like stand where we had some great discussions with customers and we were able to show live demos on some of our new OSGi functionality in the WAS v8.0 beta.

Feedback from our WUG members was very good. In general the timetable and quality of sessions and speakers was Excellent/Very good on feedback forms. The day ended with a meet the experts panel with many great minds up on stage:  (half the panel, pictured left to right - Andy Piper, Ian Robinson, Alasdair Nottingham, Leigh Williamson) 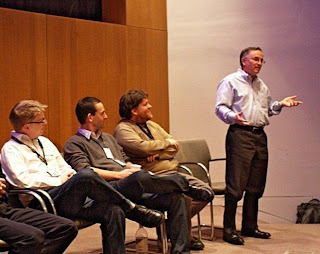 If you're interested in WAS and haven't been to a WUG event before, I would strongly reccommend you attend.  Meeting people and talking to others using WAS and IBMers between sessions are often as valuable as the sessions themselves! :o)
Posted by Simon Maple at 14:57